In 2013 Courtney Brown at the Farsight Institue was approach by a TV company with an idea for a TV series. This culminated in a project for the TV company which was in part filmed LIVE on camera. The target turned out to be the infamous Oak Island Money Pit. I (Daz) did two Rv sessions for this project a kick off session to ‘get me there’ then a second session recorded LIVE on camera. Both of these are enclosed in the pdf file below.

I was reminded of this project due to a breaking news story this week which discussed: 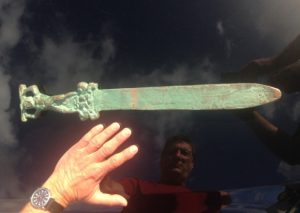 //Now historic investigator J. Hutton Pulitzer, who previously featured on the show, has put a large white paper together with a group of academics from the AAPS (Ancient Artifact Preservation Society).

He claims to have evidence of a Roman sword found submerged just off Oak Island – and what is believed to be a Roman shipwreck.//
– source: http://tinyurl.com/zuwbm3h
My data indicates a small team of men who trvelled a distance to get to the location, working as a team, a military feel to them and they carried edge based weapons…. and much, much more.

Check out the pdf file below for the remote viewing data in full.