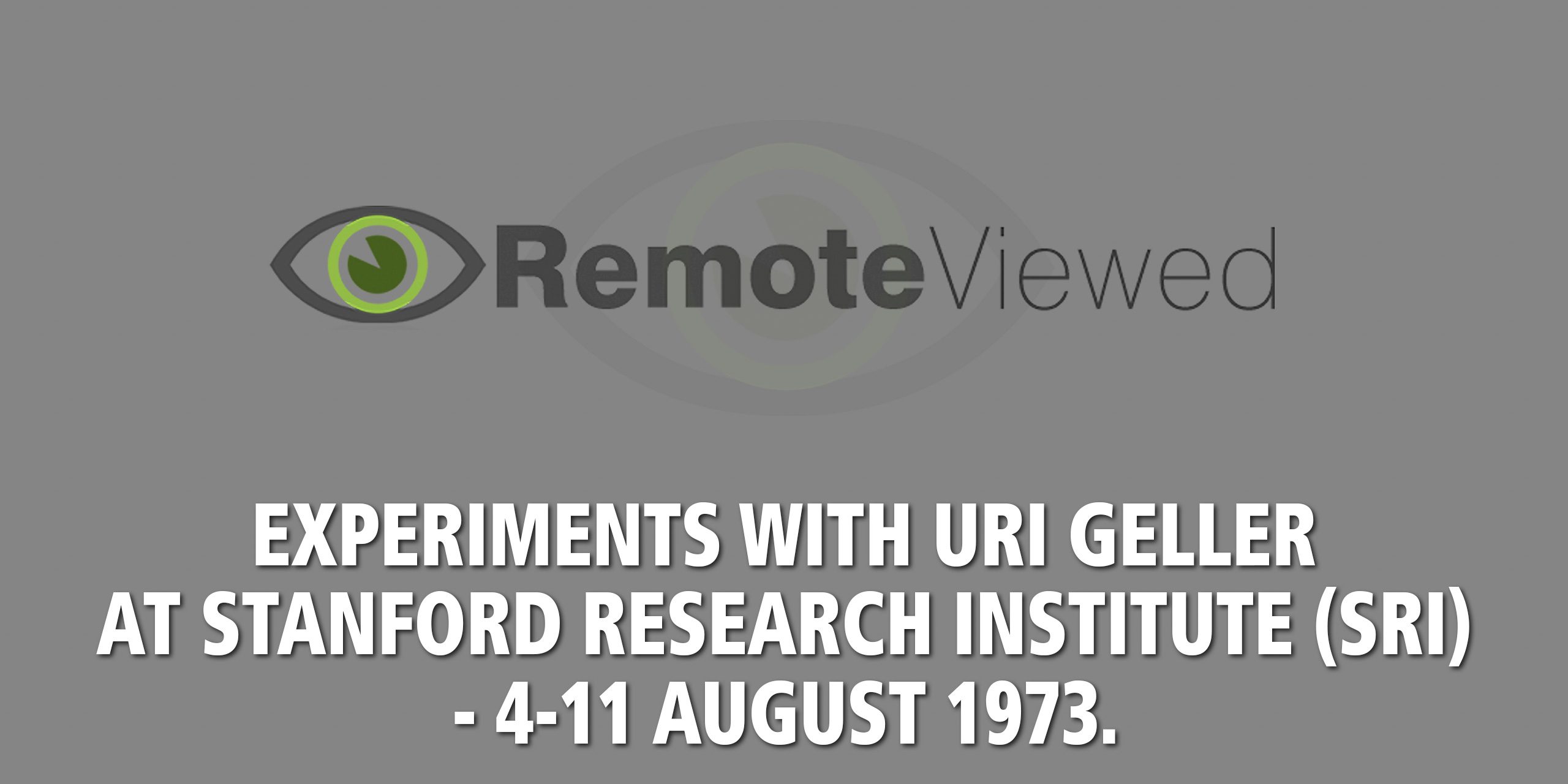 During his early career, Geller allowed some scientists to investigate his claims. A study was commissioned by the United States Defense Intelligence Agency as part of the Stargate Project and conducted during August 1973 at Stanford Research Institute (now known as SRI International) by parapsychologists Harold E. Puthoff and Russell Targ.

Geller was isolated and asked to reproduce simple drawings prepared in another room. The experimenters concluded that Geller had “demonstrated his paranormal perceptual ability in a convincing and unambiguous manner”.Writing about the same study in a 1974 article published in the journal Nature, they concluded that he had performed successfully enough to warrant further serious study,coining the term “Geller effect” to refer to the particular type of abilities they felt had been demonstrated.

During Uri Geller’s visits to the Stanford Research Institute, he took part in certain experiments that do not appear in either of the foregoing two papers by Harold Puthoff and Russell Targ. What follows is the narration to a half-hour film, shot at the SRI laboratories, that contains these additional tests. The research presented here was conducted during Geller’s first visit to SRI – a five-week period in late 1972. The film was sponsored jointly by the Mind Science Foundation, the Science Unlimited Research Foundation, and EDMA, all of San Antonio, Texas. It was first shown publicly on March 9, 1973, at a physics colloquium at Columbia University. Because a film itself cannot offer Proof of genuine paranormal abilities, Puthoff and Targ made the following remark at the end of the narration: “What we’ve demonstrated here are experiments that we performed in the laboratory and should not be interpreted as proof of psychic functioning.” Since the film also depicts some experiments that have been reported in the previous two papers, the text of the film has been edited, with the consent of the SRI researchers, to avoid repetition.

The following narrative is published for the first time, with the permission of the researchers.
THROUGHOUT mankind’s history there has existed a belief that certain gifted individuals have been capable of producing physical effects by means of some agency generally described as psychic or psychoenergetic. Substantiation of such claims by accepted scientific methodology has been slow in coming, but recent laboratory experiments, especially in the Soviet Union and Czechoslovakia, and more recently in our own laboratory, have indicated that sufficient evidence does exist to warrant serious scientific investigation. It would appear that experiments could be conducted with scientific rigor to uncover not just a catalogue of interesting events, but rather a pattern of cause-effect relationships of the type that lend themselves to analysis and hypothesis in the forms with which we are familiar in the physical sciences. The SRI considers this to be a valid area for scientific inquiry.
As scientists we consider it important to examine various models. describing the operation of these effects so that we can determine the relationship between extraordinary human functioning and the physical and psychological laws we presently understand. It is not the purpose of our work at the SRI to add to the literature another demonstration of the statistical appearance of these phenomena in the laboratory, but rather we seek to achieve an understanding more compatible with contemporary science, and more useful to mankind.

Here we describe partial results of a five-week investigation conducted at the Stanford Research Institute with Uri Geller. It was set as an absolute that experiments, to be worthy, had to be under institute control and not Geller’s.
We conducted a double-blind experiment in which someone not associated with the project came into the experimental room, placed an object into a can chosen at random from ten aluminum cans. The randomizer then left the area, and the experimenters entered the room with Geller – neither the experimenters nor Geller knowing which can contained the object. In one case, the target was a3/4-inch steel ball bearing. The ten cans had been arranged neatly, and Geller’s task was to determine which of the ten held the steel ball bearing. He was not permitted to touch the cans or the table. The experimental protocol called for the experimenter to remove the cans one at a time in response to Geller’s instructions. Eventually, there were just two cans left, and Geller indicated by gesture and in writing which one of the remaining cans contained the target. He was correct. It was only at the end of the experiment that Geller touched the can that he believed contained the object. The protocol included the possibility that he might touch a can accidentally. In such a case, that would count as a miss.

After repetition of this experiment several times, using different objects, Geller was finally able to walk into the room, look at the cans lined up on the table, and just pick up the one that contained the target. We have no hypothesis at this point as to whether this is a heightened sensitivity of some normal sense, or whether it is some paranormal sense.

In another case, one can contained room-temperature water. Again, the can had been filled by an outside person who randomized the position of the cans in a box. Then the box was rotated by a second person so that there was no one person in the room who knew the location of the target can. Geller entered the room and had no difficulty picking out the can that contained the water. We repeated this type of experiment fourteen times; five times involving a target, which was a small permanent magnet, five times also involving a steel ball bearing as the target. Twice the target was water. Two additional trials were made – one with a paper wrapped ball bearing, and one with a sugar cube. The latter two targets were not located. Geller felt that he did not have adequate confidence as to where they were, and he declined to guess, and passed. On each of the other twelve targets -the ball bearing, the magnet, and the water – he did make a guess as to the target location and was correct in every instance. The whole array of this run had an apriori probability of one part in 10^12, or odds of a trillion to one.

In another double-blind experiment a die was placed in a metal file box (both box and die being provided by the SRI). The box was shaken up with neither the experimenter nor Geller knowing which face landed up. Out of ten trials, in which he passed twice and guessed eight times, the eight guesses were correct. It gave us a probability of about one in a million. We again point out that there were no errors when Geller made guesses.

We also performed two experiments in psychokinesis. In one test a one-gram weight was placed on an electric scale. It was covered by an aluminum can and by a glass cylinder to eliminate deflection due to air currents. The first part of our protocol involved our tapping the bell jar; next tapping the table; then kicking the table; and finally jumping on the floor, with a record made of what these artifacts looked like so that they could be distinguished from actual signals. Geller’s task was to try to influence the scale merely by holding his hands above the bell jar (never touching it) and concentrating. He was able to do this. Once our recording device showed an apparent weight decrease of 1500 mg, and another time an increase of800 mg. These two readings had not been observed as possible artifacts. In fact, in no case were our intentional artifact readings similar to the signals produced by Geller, nor could anyone else duplicate the effects Geller produced.

We have no ready hypothesis about how these signals might have been produced. It is of interest to note that Geller’s ability to influence the scale improved over the period of experimentation, starting with 50 mg deflections and arriving at 1500 mg.

In another experiment Geller attempted to influence a magnetometer, either directly or by generating a magnetic field. The full-scale sensitivity of the instrument was 0.3 gauss. Throughout the experiment Geller’s hand did not come into contact with the instrument. The magnetometer itself was used as a probe to go over his hands and person to make sure that there were no magnetic objects in his hands or on him.

Geller had no apparent difficulty in influencing the magnetometer. He caused fluctuations – almost full-scale in certain cases – whose direction was uncorrelated with the motion of his hands. He was very interested in the experiments we were doing because he had never taken part in laboratory work of this kind before.

Another experiment was performed; in retrospect we consider it unsatisfactory as it did not meet our protocol. In this case Geller’s task was to deflect a compass needle, which he did. Before and after the experiment he was gone over with a magnetometer probe, and his hands were photographed from above and below during and following the experiment, so we were sure there were no obvious pieces of metal or magnets in his possession. However, according to our protocol, if we could in any way debunk the experiment and produce the effects by any other means, then that experiment was considered null and void even if there were no indications that anything untoward happened. In this particular experiment, we found later that the type of compass needle deflections we observed could be produced by a small piece of metal, so small, in fact, that it could not be detected by the magnetometer. Therefore, even though we had no evidence that Geller might have employed this means, we still considered the experiment inconclusive and an unsatisfactory type of experiment altogether.

There are a number of unconfirmed physical effects that need further investigation. One of Geller’s main attributes that had been reported to us was that he was able to bend metal from a distance without touching it. In the laboratory we did not find him able to do so. In a more relaxed protocol, he was permitted to touch the metal, in which case the metal did indeed bend. However, it becomes clear in watching this demonstration on film that simple photo-interpretation is insufficient to determine whether the metal is bent by normal or paranormal means.
In the laboratory, these spoon-bending experiments were continually filmed and video-taped. It is evident that some time during the photographic period a stainless steel spoon became bent. However, unlike what we had heard about Geller, it was always necessary for him in the experimental situation to have physical contact with the spoon or, for that matter, any other object that he bends. It is not clear whether the spoon was bent because he has extraordinarily strong fingers and good control of micromanipulatory movements or whether, in fact, the spoon “turns to plastic” in his hands, as he claims.

A number of the spoons were bent by one means or another during the course of our experiments. There is no doubt that the spoons were bent. The only doubt remains as to the manner of their bending. Similarly, we have rings that were bent by Mr. Geller: a copper ring and a brass ring that were manufactured at the SRI and measured to require 150 pounds of force to bend them. These rings were in Geller’s hand at the time they were bent.

The following brief recap is a reminder of those experiments we feel were best controlled. They are the perception experiments, including the double-blind- hidden-object experiments, and the double-blind-die-in-the-box experiment. The two psychokinetic experiments – the depression or raising of a weight on an electric scale and the deflection of the magnetometer – also do not seem to admit of any ready counterhypothesis. What we’ve demonstrated here are the experiments that we performed in the laboratory and should not be interpreted as of psychic functioning.