In the world of everyday existence, the five senses reign, but their powers are sharply limited. We perceive the universe in glimpses through narrow portals, acquiring our knowledge by sight, sound, taste, touch, and smell. But what if there were more than this? what if there were other ways of seeing?

All over the world, from time immemorial, some people have been called gifted, known as the second sight, the third eye, the sixth sense – powers that seem to bypass the usual sensory channels and transcend reality.Shamans have commuted with their god’s. saints have seen visions, and oracles have foretold the death of king’s. And from time to time ordinary people have felt a momentary slippage into the strange world of the unknown.

In ancient times, people spoke of prophecies and miracles. In our more rational age, such things tend to be called extra sensory perception (ESP), defined as the apparent reception of information through means other than the sensory channels.

These ‘special’ or ‘gifted’ people have existed through every age, and at times have had a great effect on history.

Joan of Arc, the peasant girl of Orleans, claimed to hear voices that told her she was divinely appointed to rout the English from French soil. The predictions she revealed in the course of her short life were accurate. The English did withdraw, and she even foretold her own imprisonment and death saying that she would last ‘but one year or a little more’. Almost five hundred years after burning her at the stake, the church declared Joan a saint.

There have been many ‘gifted’ insightful and intuitive people over the centuries, creative and inspirational thinkers. They all helped us understand our connectedness to the universe and they led the way to our new and developing understanding of the mechanisms of intuition.

There are four types of extrasensory perception (ESP) that are commonly studied and experienced.

Many scientist and skeptics scoff at ESP research, but gallop polls have continuously shown a high level of belief in this phenomena. Some of the practices like Remote Viewing have years of scientific data spanning many millions of trials form many different scientific laboratories, and to some scientist the reality of an effect has been proven beyond all doubt, yet to others, well lets just say they remain skeptical.

There are many instances of stories and experiences whereby a natural form of remote viewing seemed to have been in effect from the earliest of time and human experiences right up to the 1970’s when the CIA started to take notice. This then started the modern Remote Viewing era as funding was poured into secret research at SRI.

In the early 1970’s (’72) reports started filtering out from the former USSR that psychic research was being taken seriously. This coupled with the released of the book ‘Psychic discoveries from behind the iron curtain’ caused the intelligence community to look into psychic research or fall behind. After all if the enemy was looking into this – then so should they.

In 1972 The CIA following up on these leads approached scientists at SRI (Stanford Research Institute). SRI was eventually tasked with the research and asked to come up with a repeatable, reliable method or psychic technique that could be used for intelligence and taught. For over two decades the remote viewing experiments of Russel Targ & Harold Puthoff continued at SRI. The team expanded remote viewing attempts over vast distances and delivered a training methodology to the American Military in 1985. This was called CRV (Controlled remote Viewing) and was the culmination of over a decade of research into the mechanism of psychic functioning by Hal Puthoff and a talented New York Intuitive, artists and author – Ingo Swann.

An infographic remote viewing history, its participants and its milestones can be viewed here.

In the early years of the SRI research a handful of intuitive’s were used and experimented with to great effect these included:

One subject a photographer by the name of Hella Hammid, was judged to have described correctly five out of nine target sites, a feat that beat odds of 500,000 to 1. 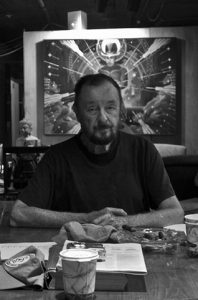 Ingo Swann, an artist, author and well known intuitive, after reading a paper of theirs about quantum physics being a possible explanation for extra-sensory perception in 1972, offered to be tested by Puthoff and Targ at SRI.  During the earliest testing at SRI, Swann was accurately able to describe the features of a uniquely-designed magnetometer buried six feet in concrete beneath the floor. He also affected the output signal of the magnetometer on a strip chart recorder. (Click here for a full article and paper on the Famous Magnetometer experiment in eight Martinis Magazine)

Ingo soon became bored with the scientific repetition of experiments and suggested that he could travel psychically to anywhere on the planet. After an initial skeptical reaction form the SRI scientists they relented and tried Ingo’s suggestion of picking a coordinate anywhere on the planet – and he would tell them what was there. This was tried, and proved to be successful, time after time. “Project Scannate”, remote viewing by coordinates was born.

Swann and other viewers, including Pat Price, were provided with latitude and longitude, and they attempted to view the geographical location at those coordinates. Ingo Swann and Pat Price proved to be remarkably accurate at this technique.

Further rigorous testing of Swann, Price, photographer Hella Hamid, and others at SRI convinced Targ and Puthoff that remote viewing was not just an ability to be enjoyed by certain psychics but that anybody could do it.

One of the best Remote viewing sessions & feedback in the public domain is the Ingo Swann Remote Viewing of planet Jupiter. This was done at SRI in 1973. Read it here.

In 1977, Targ and Puthoff published the results of their remote viewing experiments in the book ‘Mind-Reach’ in which they evaluated the ways in which remote viewing could be put to practical use, they listed:

(a) Survival value — many spontaneous OBE’s occur at the time of a serious accident, injury or during surgery. “It is in primarily life-threatening situations that exceptional spontaneous functioning seems to occur” they say; (b) Executive ESP — use of remote viewing and other anomalous abilities in the business world; (c) Futuristic predictions; (d) Medical diagnosis; and (e) Space exploration.

The early results impressed the intelligence agencies namely the CIA, who were funding the early research. But not all was well at SRI. Ingo Swann & Pat price allegedly did not get on well and the psychic contest that raged between them often felt like it would explode outside of SRI itself. In August of 1973 Ingo’s contract ended and he left SRI.

Late in 1974, as Pat price left SRI to work for the CIA directly, Ingo returned and was tasked with producing a methodology for remote viewing that was teachable and offered repeatable results for an intel use. This method was CRV or Controlled Remote Viewing. Over the period 1978 – 1986, CRV was developed and tested out of SRI using first Ingo as the primary test subject then eventually onto  25 selected trainees including the Military remote viewers who were trained in Ingo’s techniques.

CRV was developed for and used by the military right up till the end of the military and intel psychic spying program in 1995. Now, CRV is taught to the general public by some of Ingo’s military students and some have adapted CRV with changes creating their own methods and products over the years so that we now have CRV, TRV, SRV. TDS and other variants.

The other side of the secret program (science) based out of SRI and then later SAIC (from 1985 – 1995) used initially CRV but then adopted a different more natural approach/method to remote viewing than Ingo’s very rigid six stage CRV. This type of method is championed by people like Joe McMoneagle. In 1986 the Remote viewing program left SRI and Edwin C May took it to SAIC (Science Applications International Corporation) where it continued with intel funding till 1995 when the CIA went public with the program and the ‘official’ program closed.

The entire Government/military remote Viewing project lasted over 23 years and encompassed many different names and owners, including:

As you will understand this is a VERY condensed version of Remote Viewing history. The Official remote viewing program started in 1972 and finished in 1995 – over twenty three years of scientific research. This generated well over 95,000 pages of data and information. A proportion of this data (96,000 pages) has been released by the CIA as the Project Star Gate FOIA archives. A few of these documents are enclosed within this website for you to get a feel  for the results and the science.

For a full picture of the history of Remote Viewing I recommend these resources: