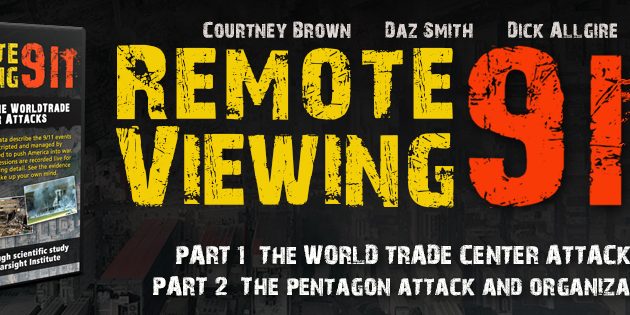 Before we go into the heavy details of this Remote Viewing of 911 project I wanted to share a little background on me and my participation in it. I had prior to this project independently done a little research, watched allot of videos and had come to the conclusion that I felt that parts of the official 911 events story did not make sense. Primarily the actual collapse of a steel framed building, (let alone three in one day). Two due to impacts/fire damage and a third due to just fire damage. All three buildings coincidentally ALL collapse exactly in their own footprints like controlled demolitions. Many experts agree steel framed buildings do not collapse due to fires and hadn’t until this day.

Then there is the Pentagon attack and the initial small amount of damage which was apparently from a plane, this doesn’t look right to me, when a plane hit the towers you can clearly see the shape of the plane and its wings in the damage of the buildings, yet in the Pentagon  damage (which was initial very minimal) there was an initial small hole and then fire. The wings, fuselage and almost an entire plane is alleged to have turned to dust – surely we would see the same kind of damage as seen in the towers, wings hitting stone. Add to this the severe lack of ANY credible video showing ANY kind of plane hitting the pentagon, and even after all these years this footage being kept secret, I find this very suspicious. 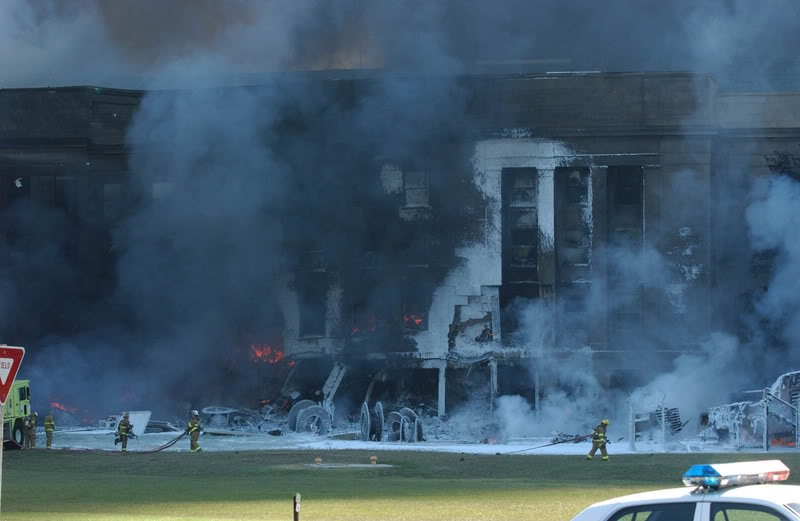 Where is the Similar Airliner/wing damage to the Pentagon? No destroyed columns, windows still intact and other anomalies… 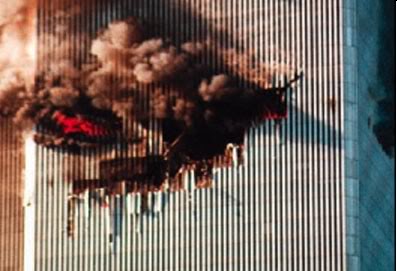 Note: that we can even see the wingtips on both sides and a massive hole spanning the distance in between

So, going into this project I did believe that there was probably some kind of conspiracy behind the events of that fateful day and my Remote Viewing data has only affirmed this. But also remember I had NO information what-so-ever upfront on what this project was about, and in all my years remote viewing for clients, practice and colleagues this is the first time I have been targeted against the 911 events.

First I need to make it perfectly clear that neither Dick Allgire nor myself as remote viewers on this project, had ANY information on the project until it was finished. We both worked alone (solo) and BLIND on each of the targets we were given. We didn’t communicate with each other nor Courtney other than to get the next target number during the time of this project.

It was a complete shock to both of us when it was finally revealed what this project was about long after we had submitted all our paper and video sessions. Although I will admit that the accumulated data was so strong that I had a very strong feel that It was something ‘like’ the 911 attacks, something catastrophic. I also need to say that I cannot be 100% sure that my prior research and conclusions didn’t come out in some way and influence my remote viewing data. there is no known way to know or measure this.

As we don’t yet know the working mechanism for how remote viewing works I cannot remove this possibility from the equation. As remote viewers we are amateur scientist as we must include these possibilities. We must also include the possibility that Courtney being the tasker for this project, somehow projected his influence or ‘overlay’ on what he wanted outcome wise. Courtney has stated and does on the video that he expected us to reveal data that would follow the official story, so this kind of overlay should not happen in this case, but we cannot discount it and have to be open about this.

Both Dick and I got very similar to almost identical data for each of the seven separate targets for this project. We both clearly describe explosive attacks on structures by organised secretive people working in separate groups run by a command structure. We seem to be led by the process to go into great depth and detail about the actual explosions themselves and the debris from this and that this debris is important to this project and any questions asked. This felt like microscopic particles of hot/molten or shaped metal or something similar.

The Remote viewing was produced in two ways – first paper/pen sessions then leading to Video sessions recorded LIVE on whiteboards. Both viewers worked alone and BLIND to the project and each of the seven separate targets. At the end of all the work, I was asked to develop some of my white board sketches of target 10G into a worked-up graphic (this was done blind and before feedback). This was later to be revealed as:

See this sketch below that I created (whilst still BLIND to the targets).

As we all know there are numerous documentaries, articles, and books that cover the alternative theories on the events of 911. I suggest that you review the remote viewing material with an open mind and then evaluate with ALL the available material and viewpoint to make an informed decision on how accurate you believe our data is. Clearly we are both on target describing structures being attacked by explosives and explosions causing death and destruction – but it’s the how and who. My data clearly shows man made objects hitting structures and I used the words ‘like a bullet’ and ‘missile’ several times, its up to you to decide whether the data shows a missile or a plane used as missile. Other data like people involved internally within structures setting chemical explosive components are harder to quantify but do correspond with some theories like the popular one about WTC7 backed by over 2,000 architects and engineers who believe this was a clear demolition. My guess is only time and history will tell.

Enclosed here are a small few examples of the paper/pen pages for this project: 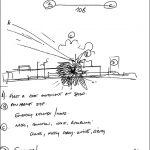 A page of data about the collapse of Tower 2 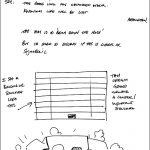 A page of data about the attack on the North Tower. 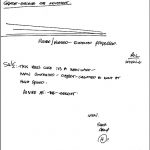 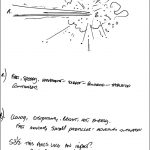 A apge of data about the Pentagon Attack

Daz Smith
My bio and background in regards to Remote viewing can be found here: 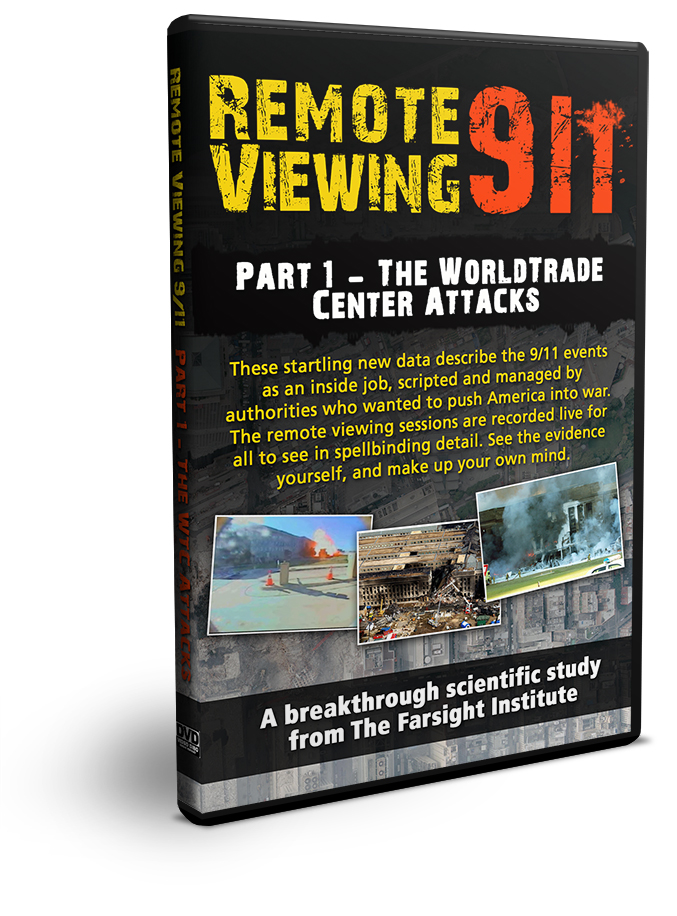 Courtney Brown, Ph.D., a scientist working with two of the world’s leading remote viewers using U.S. military derived methodologies, is reporting a new project done at The Farsight Institute containing startling new data relating to the 9/11 terror attacks of 2001 in New York City and Washington, D.C. The new project has just been released as a two-part video, “Remote Viewing 9/11.”

Remote viewing is a mental skill developed by the U.S. military as a form of “non-local awareness” used by U.S. intelligence agencies as an exotic form of spying. Dr. Brown is the Director of The Farsight Institute, a non-profit organization that has conducted research into the remote-viewing phenomenon since 1995. While Dr. Brown is clear in saying that remote viewing cannot “prove” anything by itself, such data can be very persuasive, especially when compared with corroborating physical evidence that allows researchers to “connect the dots.”

In early 2014, Dr. Brown tasked two of the institute’s top viewers with a series of targets, which are places and events that the viewers are expected to perceive. Neither viewer was told anything about the nature of the targets or the project, which means that the viewers did all their work totally “blind.” They also worked independently with no contact or communication between themselves.

Daz Smith conducted his remote viewing in Bristol, England, while Dick Allgire performed his sessions in a similar fashion in Hawaii. All of their work was recorded live on video cameras, with no one else present when they did their sessions. Completely unknown to them, the targets involved various aspects of the 9/11 events. What caused the total collapse of three steel reinforced skyscrapers? What damaged the Pentagon? What preparations were involved in the attack?

Dr. Brown said he was originally expecting these two viewers to validate the official story of the attacks. He was shocked by what they produced, not just because what they saw contradicted the official narrative, but also because both viewers’ data were so closely correlated. This groundbreaking two-part documentary, “Remote Viewing 9/11,” runs nearly four hours. The video shows unedited segments of the actual remote viewing sessions that allow the audience to witness the story as it unfolds in real time.

Whatever one’s opinions about the 9/11 attacks, watching these viewers work live in real time appears to shed new light on both the remote viewing process itself as well as the horrible events of that day. This project may challenge most people’s views of one of the most important moments in recent history.