Remote viewing attacks from within 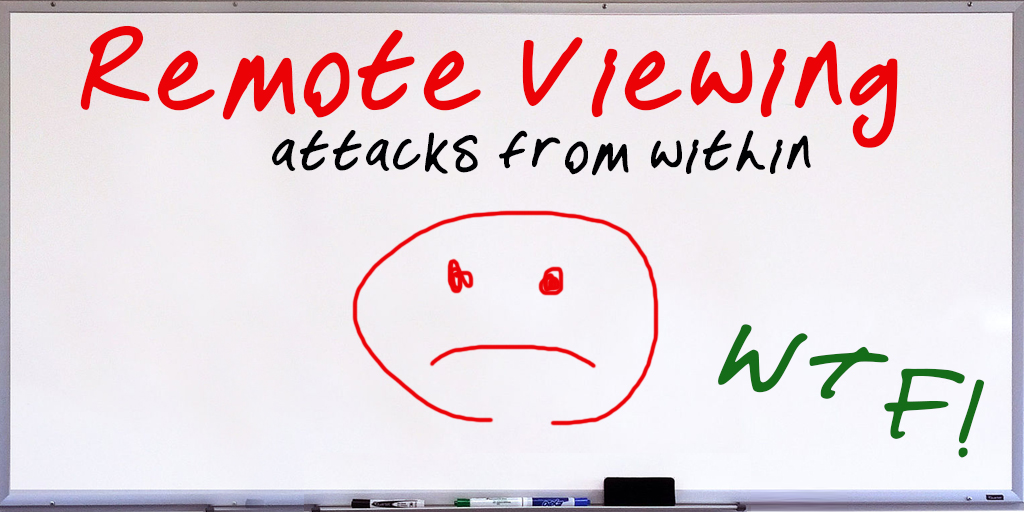 Dear Remote Viewing community – It’s about the right time to let you, all remote-viewing enthusiasts, know about a situation that has been developing around some of my remote-viewing project work, together with that of others both in and out of Courtney’s Farsight projects. This situation may have broader implications to other remote viewers in the community.

It appears that two members in HRVG (Hawaii Remote viewing guild), who are also noted board members of IRVA (the International Remote Viewers Association), are waging what amounts to an aggressive, coercive, and highly threatening legal attack on a prominent remote viewer, and this attack should probably be considered a cause for concern regarding a possible violation of the IRVA code of ethics which states:

“A Remote Viewer shall refrain from any conduct that would bring reproach by or negative attention from the general public, news media, or law enforcement to the remote viewer acting as a remote viewer; the field of remote viewing in general; his or her client, if any; or the Association.”

These members are making legal threats and challenges to Dick Allgire (formerly of HRVG). Also, myself, Courtney Brown, Hitomi Akamatsu are also named in the legal papers. The threats constitute a concerted effort to force Dick Allgire to sign what amounts to a contract that would limit his ability to publish his remote-viewing work. The threats state that if he does not sign this contract, he will be caught up in expensive litigation. If this happened, it could wipe out Dick Allgire’s retirement income and possibly leave he and his wife bereft.

These legal challenges have already cost Dick Allgire thousands of dollars, not to mention a huge amount of time needed to respond to the threats by both himself and others. This is money that none of us in remote viewing have. Friends, you know us as people, you’ve seen our work, even if you don’t like what we do for any number of reasons, you know we are trying to do this, and pretty much on no budget. We are trying to make this contribution to remote viewing with little to no real income in our current working lives. This legal challenge has also taken a large mental and physical toll on Dick Allgire, a person who is in recovery from a disabling brain injury which he had a couple of years ago – an injury that forces him to live on disability now, and which forced him to leave his job as a newscaster.

The main absolutely insane (IMO) claim is that HRVG, and specifically Glenn Wheaton, owns the copyright on ANYONE using a whiteboard as part of their remote viewing process. That is, Glenn claims that he invented this remote-viewing technique (writing on a whiteboard), and proof of this is that the IRVA published an exceptionally brief note/article outlining his approach to doing this in Aperture issue 24 (Fall/Winter 2014). According to Glenn, this makes doing a remote-viewing session on a whiteboard a proprietary HRVG technique, and that others also using whiteboards when remote viewing are using HRVG intellectual property without the permission of the HRVG. Importantly, the claim is being made that Dick Allgire taught others at Farsight (Courtney Brown and myself) how to draw on whiteboards when remote viewing.

Therefore the Farsight projects that I and many others participate in can’t be done if we use whiteboard as a presentation medium unless we have the permission from HRVG and Glenn Wheaton? And in doing so we infringe his claim of copyright????? What makes this so maddening is that the idea of copyright is not being used with respect to what is actually drawn on the whiteboard (which is copyrightable) but rather the use of the whiteboard itself (which IMO is not copyrightable).

Therefore the Farsight projects and many other remote viewers who have also used this commonly used presentation medium of a ‘whiteboard’ can’t do so unless we have permission from HRVG and Glenn Wheaton. And in doing so we infringe his claim of copyright?????

I want to state here and now for the record that I have received no transfer of any secret or confidential techniques from Dick Allgire with respect to using a whiteboard while remote viewing or any other aspect of remote viewing. Dick has never communicated with me about any aspect of the HRVG approaches to remote viewing, and I don’t care to know anything about it. I am a graphics designer by profession, and I have used whiteboards continuously for all sorts of reasons ever since they were invented. More specifically, I have been using whiteboards personally for project management and idea mapping in design, something called mind mapping, for well over a decade. I did not receive nor know of ANY method or technology that Glenn and HRVG claim I have infringed upon by using a whiteboard within the remote-viewing process. A whiteboard is a communication recording and sharing medium, like paper, like video. And me making my impressions on this medium is just me doing CRV – this is not HRVG in any way. No one can copyright the use of a medium!!!!

The second claim which does not involve me – other than making me laugh – is the claim that even without any signed documentation (such as a nondisclosure agreement), the HRVG owns the remote-viewing sessions of others who have taken any form of training with them. Now, this one really affects Dick and Hitomi and other past members or persons trained with HRVG. But as a larger community of creative people who use skills like sketching, modelling and more, this type of claim could affect us all to some extent, and we should all learn from this.

They are also attacking the work of noted remote viewer Hitomi Akamatsu, and they demand that the video produced by Dick Allgire with input from HRVG – ‘Hitomi and the God Particle’ be removed from distribution channels, and that the HRVG claims to own the copyright of Hitomi’s RV work that she may have done while studying with HRVG. This claim is being made without a signed release from Hitomi that would transfer the copyright to the HRVG. They are “asserting” their claim of copyright, whatever that means. This is another shameful bullying tactic, especially as Hitomi is in no fit state (due to illness related to Fukushima troubles). She is not able to speak or defend herself. But let’s be honest she shouldn’t even have to. I have a written communication from Hitomi when she asked me to put her RV experiments on my website that states:

“I would like to start placing my full RV sessions on a website in public. Please kindly advise me how to do so. I do not teach RVs. (I offer no RV classes). That would be only for the benefit of the humanity, or for all viewers and people who are interested.

I still feel rather surprised that some people want to know my RV work. I am very grateful and thankful for you and those who are interested in my sessions.
I am an independent viewer. I don’t belong to any RV community or HRVG. In fact, HRVG excluded me before I have finished learning their protocol. (They said that the protocols should be taught to only USA citizens due to the national security. I could not be a member because I am a foreign national). However, I am still in touch with Dick. He was highly praising your great work, which are featured in the new DVD.

Many thanks and blessings
Hitomi”

Is this how we want other people within remote viewing to act, to bully and threaten people, two of whom who are ill and financially fragile? Is this the kind of people that should be on the board of IRVA – an organization that supposedly tries to positively promote remote viewing with ethical practices and guidelines?

Copyrighting the use of whiteboards while remote viewing, and proprietary techniques – really?
Is it ethical to tie-up other remote viewers (and in Dick’s and Hitomi’s cases – while they are ill) in costly and bullying legal dramas that further negatively impact their personal situations, finances and wellness.

HRVG and I also ask you this:

I’m confused. If Glenn Wheaton is correct in his CLAIMS that he was taught and used his form of remote viewing whilst serving in spec ops in the military – then does he actually own the techniques he now claims sole proprietary rights over? I mean, isn’t the entire HRVG bag of stuff owned by the U.S military? And then wouldn’t it be true that all of it was therefore paid for with American citizen tax dollars, just like the Star Gate program?

Can HRVG claim they have proprietary rights over a technique (which they apparently couldn’t fully teach to Hitmoi due to it being national security transfer to a foreign national)? Can the HRVG really claim that it or Glenn owns any of their methods if all of it is actually government owned?

Now, isn’t it the case that either the HRVG RV methods were developed by the U.S. military and taught to Glenn when he served in the military, in which the military owns all the techniques

Glenn created the HRVG techniques himself and now claims proprietary ownership of them?

It CANNOT be both? Correct? Glenn cannot have been taught these by the military who still keep them (national security) and simultaneously claim that he now owns the copyright for them?

To the remote viewing community:

We wanted to let you, the remote viewing community, know what was happening behind closed doors. You all need to know of some of the bullying tactics and IMO crazy legal claims being made by those who are supposed to work ethically and for the good of remote viewing? – Does it look good when flimsy legal claims are made, when other remote viewers are legally challenged over simply using a whiteboard to record remote-viewing data? Are these the people we really want as community leaders and spokespeople?

I have seen the correspondence sent to Dick, some of the things being said and done to him in his fragile mental state of slow recovery, is just terrible and shocking. And although I had a low opinion of the participants beforehand, this adds to my concern that their activities should be brought into the light for all to see. That these attacks are especially being made against Dick, a friend, a colleague, and an inspiration within the remote-viewing community, is especially troubling. No one was a better and more prominent supporter of Glenn Wheaton and the HRVG for so many years. Dick stood up for Glenn in many online battles, and he tirelessly promoted Glenn at IRVA meetings. And now it is the same Dick Allgire who is now being savagely attacked by the very man he looked-up to as a friend and mentor. If I have one criticism of my friend Dick Allgire, it is that he was too loyal to Glenn and the HRVG.

As I said earlier, this campaign against the remote viewing work we have published through Farsight is IMO crazy/stupid and with no real basis in reality, perpetrated by jealous, egotistical and spiteful people who have no problem in attacking and bullying others even when those people are debilitated or ill. These attackers are people who want to see great remote-viewing projects removed from public view. They are people who claim ownership over the work of other remote viewers without any signed release or other basis. This farce needed to be shared with you all. You need to be aware of what they are doing and claiming.