An announcement from THE FAMILY OF INGO SWANN – March 2, 2014 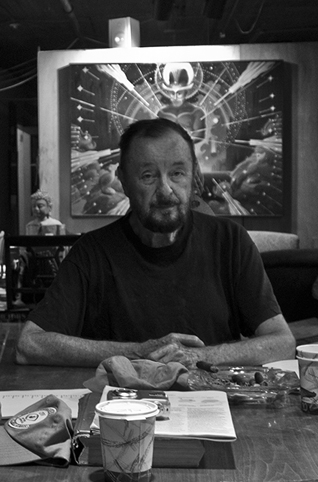 March 2, 2014 – An announcement from THE FAMILY OF INGO SWANN

On this first anniversary of Ingo Swann’s March 2, 2013 memorial service, which marked his passing on January 31, 2013 and the extraordinary life he lived, we are very pleased to share news of some of the exciting developments regarding his estate, the gifting of paintings, correspondence and research files, books, and the institutions that have received them.

Ingo would have loved the American Visionary Art Museum (AVAM) and its mission statement, which says, in part, “…visionary art begins by listening to the inner voices of the soul.” Located in Baltimore, Maryland’s Federal Hill neighborhood, AVAM was designated by unanimous Resolution of Congress as America’s official national museum, education center and repository for intuitive, self-taught artistry. “A good museum,” said its founder Rebecca Alban Hoffberger, “does more than just have objects that stand there on pedestals. The best ones are muse-based, connecting visitors to the heart of inspiration.”

Seven of Ingo Swann’s exquisite paintings*, some never displayed in public before, will become part of AVAM’s permanent collection. The few people who were lucky enough to have viewed some of Ingo’s art in his NYC studio know that with every brushstroke, the paintings represent the experiential artistic expression of what this eminent visionary perceived. One of the ways Ingo furthered his own understanding of spiritual realities – bridging objective science and inner consciousness — was through his painting. A selection of Ingo’s paintings will be shown at AVAM in fall 2014 as part of an exhibit entitled, “The Visionary Experience: Saint Francis to Finster.”

There is a direct link between Ingo’s work as an artist and his research in remote viewing, parapsychology, consciousness exploration and bioenergetics, clearly described by Martin Ebon in the quarterly journal Spiritual Frontiers: “It was when Ingo started to make drawings of his psychic visions that he discovered a very basic kind of ESP system that lies within us in undeveloped form. It is this system and the process of using it that became the foundation of Ingo’s lifelong research.”

The repository of much of that research, scheduled to be available beginning in 2015, is the University of West Georgia, Ingram Library, Special Collections, which specializes in Parapsychology and Humanistic Psychology. Notable among the existing Collections are the papers and records of Dr. William Roll, project director of the Parapsychology Laboratory at Duke University and Ingo’s dear friend.

Of primary significance will be the preservation there of Ingo Swann’s SRI research files, a treasure trove of information on the history and development of remote viewing. One set of SRI files contains records on all the first RV test subjects, including Tom McNear and Ingo himself, with transcripts, sessions and memos about the sessions, and the emerging understanding of the process of locating and developing the ESP core. Another set of files holds the many documents and memos Ingo created while at SRI, including requests, memos to file and general correspondence.

As part of Ingo’s personal research, he conducted remote viewing sessions targeting the planet Jupiter and its surrounding moons, Mars and Mercury. The findings in his well-known Jupiter probe were later confirmed by Voyager’s own tour of the planet in 1979. Edgar Mitchell, who made his historic moon voyage in 1971, said in the National Enquirer, “It took Mariner 10 months to get to Mercury – but Mr. Swann was able to project his consciousness there in an instant. Mr. Swann’s findings – weeks before we received the Mariner 10 data – were incredibly accurate.” The files, containing all of the remote viewing sessions, slide presentations and speeches he created to document the results, along with a binder containing the data supporting his findings will also be part of the Ingram Library’s Special Collections.
The research at SRI was aided by hundreds of scientific and other documents that provided significant insights and information. Ingo did not want those contributions to be forgotten. He kept reference files of journals, papers and articles from the 19th- and 20th- century, covering any information that pertained to the phenomena being researched. The files represent an invaluable history.

Ingo’s personal book library. A lifelong avid reader, he amassed an enviable library on every imaginable area of parapsychology.
Ingo served as editor on the book, Cosmic Art (Hawthorn, 1975), a review of metaphysical artists working between 1911 and 1955. He also wrote the Foreword, in which he said, “…this underground growth of artistic expression in the transcendental, the psychic, and the metaphysical can be seen to be not unmighty, but rather grand and poignant, deeply meaningful, and of vast importance to modern discovery in the realms of extended human consciousness.” The Cosmic Art files containing research and decades of correspondence between the authors, Raymond F. Piper and Lila K. Piper, Ingo and the artists, will become part of the Special Collections Library.
With a nod to J. Edgar Hoover, any time Ingo wrote to anyone or they wrote to him, he created a file by the person’s last name, collecting letters, cards and whatever else was part of the written exchange. He maintained voluminous correspondence files.
In a separate announcement, we are also pleased to say that we are making arrangements for the reissue of many of the books Ingo wrote. Publication is scheduled to begin in late 2014.

For more information and specific dates when these Ingo Swann collections will be available to the public, please contact the following:
American Visionary Art Museum University of West Georgia

Send any questions or comments to Ingo’s website:
www.biomindsuperpowers.com